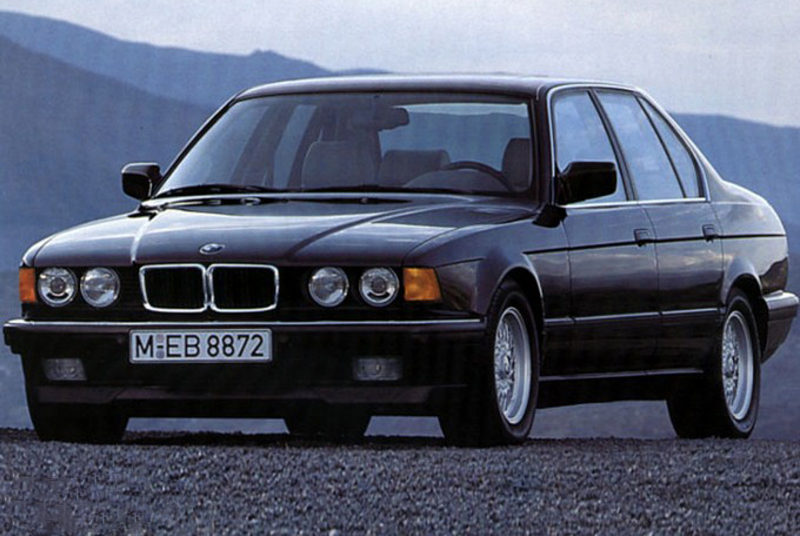 The second generation of “sevens” EZ2 appeared in September 1986 and produced even greater resonance. The model demonstrated the significant success of BMW in improving the technology and culture of production, creating a real boom in the luxury car market, setting a new standard in its class for handling and almost sports dynamics. And it is no coincidence that BMW engineers were instructed to design the best car in their category. Opponents were Rolls-Royce, Jaguar and Mercedes-Benz.

The first-born was the 735i with an in-line 6-cylinder 3.4-liter injection engine rated at 220 hp. (211 hp with catalytic converter). The build quality of the body is excellent, and largely due to this, as well as high-tech injection engines in the cabin, a very low noise level. Passengers sitting in the back in a comfortable seat (it doesn’t matter – with leather, velor or tapestry upholstery) can even fall apart in a foot-to-foot position. The instrument panel represented for its time really great progress in safety and ergonomics. Well readable instruments with many service sensors and indicators are located in the most favorable area. The predecessor, many heterogeneous switches and pointers were “on the heap”, in the new product they are somewhat spaced and evenly distributed over the entire area of ​​the dashboard, depending on significance.

In March 1987, the 730i debuted with a 3.0-liter 188-horsepower engine, which, like the 735i, was equipped with a 5-speed manual gearbox, or an automatic 4-band transmission with torque converter.However, when overclocking to hundreds, models with an “automatic” spend 1.0-1.6 s more than analogs with manual transmissions.

In September 1987, the flagship 750i models and its elongated 115 mm version 750iL were introduced, on which for the first time for machines of this class they mounted only a 4-band automatic transmission with electro-hydraulic control. Thanks to the high torque (450 Nm at 4100 rpm) of the new 300-horsepower 5.0-liter V12 engine, acceleration to 100 km / h was only 7.4 s, and the car was at least 2.3 tons in weight. Excellent dynamic qualities, stable coasting in a rectilinear motion by inertia, excellent informative and reliable brakes with an amplifier, soft response, amazing suspension work. Since September 1989, the chic 750i models began to regularly install the ASC traction control system.