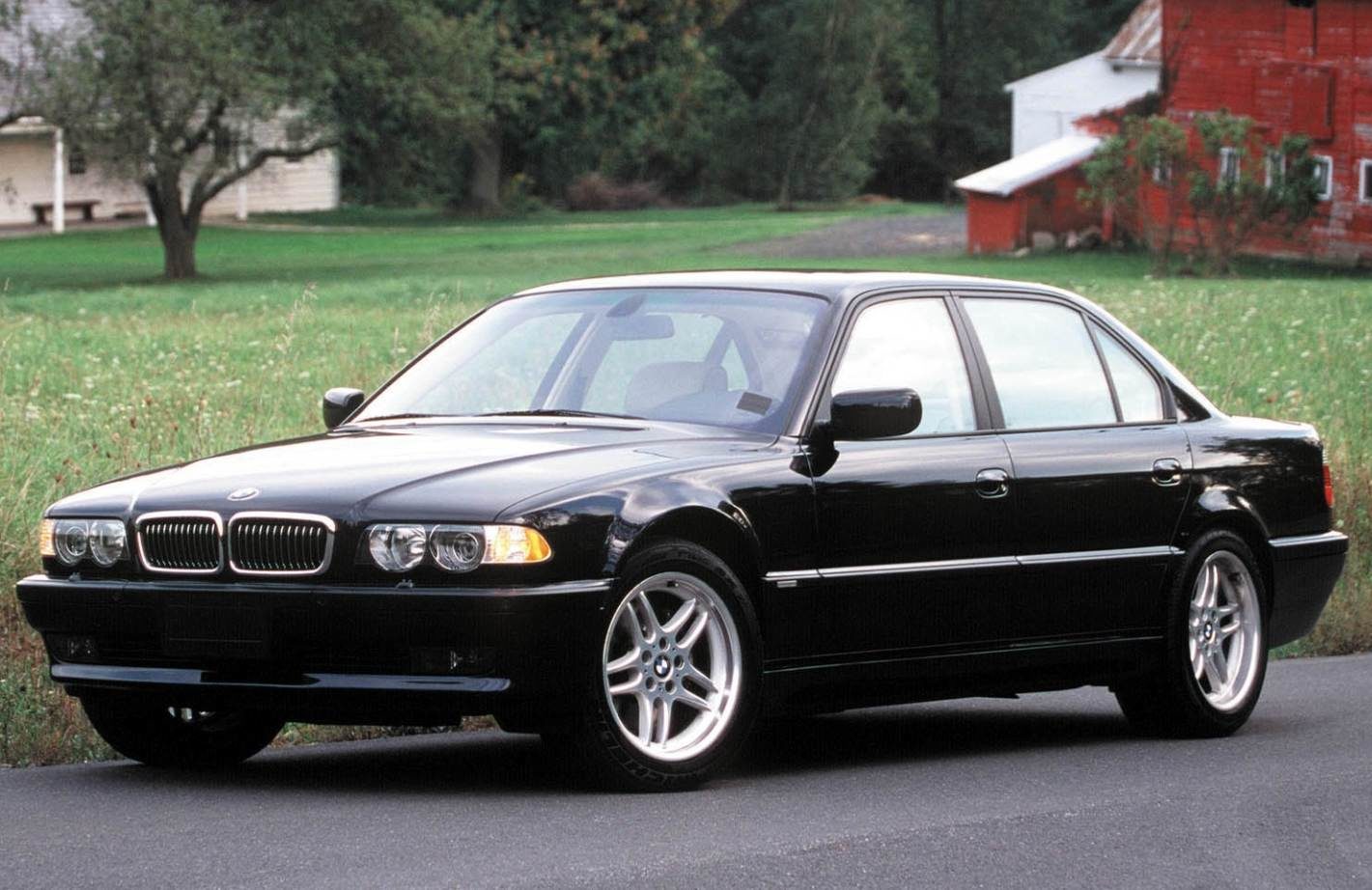 In eight years, 310 thousand E32 cars were sold. New models with even more thorough refinement are ready to continue success. A new generation of E38 appeared in June 1994. The body became more streamlined, the headlights were combined into a block with a common glass instead of the previous separate round ones. But in general, the company did not fundamentally change the styling of the model, but the saturation of the updated car with various electronic systems, such as dynamic DSC motion control, which combines Traction control and a navigation system (ASC + T), which helps to manage this very heavy (total weight up to 2500 kg) and a large-sized (4985 / 5125x1860x1435 mm) sedan was enthusiastically received by customers. The BMW 7 Series has retained a unique combination of the comfort of waking up (when needed), sporty dynamics and excellent handling for such a large car.

The large salon (an abundance of high-quality leather and fine wood trim), in which the rear passengers can even stretch and stretch their legs (especially in the 140 mm version of the iL), is made in the business-restrained style traditional for German manufacturers. The traditionally beautiful layout of the driver’s seat on BMW (with a “memory” of individual seat adjustments), the controls and the dashboard lights make a pleasant impression with its completeness. The sedan features a roomy (500 l) and a very comfortable trunk with a low edge. Options included such things as heated steering wheel rim, GPS satellite navigation system, television monitor and BMW top-end Hi-Fi system with ten speakers and a CD changer for 6 discs in the trunk. The solution to the parking problem during maneuvers in cramped urban conditions was an automated parking system, when turned on, the car itself drives into an empty parking space. The “seven hundred” suspension is so strong and reliable that it freely withstands all the vicissitudes of fate, even on domestic potholes.

In September 1994, the buyers were offered a 750i model with a 5.4-liter engine, the power of which was brought up to 326 hp. and which is the world’s most economical powertrain of the V12 scheme (16.8 l / 100 km in the urban cycle). Since that time, in addition to the elongated 750iL version, long-wheelbase 740iL sedans with a 6-speed manual gearbox or a 5-band automatic transmission have been proposed. These machines are not much inferior to the 750i in terms of efficiency, speed and dynamic parameters.

The range of engines in September 1995 was supplemented by an aluminum in-line 2.8-liter “six” with a capacity of 193 hp, which amazingly easily accelerates the car to 100 km / h in just 8.6 s. Reliability of the car is significantly improved due to the use of numerous active and passive safety elements that form multi-stage protection against deformation during frontal and side impacts.

The technical level and equipment of cars is very high and in many cases are a model for copying.They are literally crammed with electronics, and this applies not only to the engine, but also to the gearbox, suspension and active safety of the car as a whole. One of the first in the world here appeared the so-called adaptive automatic transmission (AGS system), which changes the gearshift algorithm depending on the driving modes set by the driver. It uses an electronic engine management system (ELM), not directly connected to the fuel pedal, as well as a serial system of dynamic stabilization of movement (DSC). To get special driving comfort, cars are equipped with body position control (NR) systems, electronic shock absorber stiffness control (EDC) and auto body stabilization (ASC).

Since July 1997, the serial installation of airbags in the head restraints began. The small company Sparte BMW Individual GmbH began to produce versions with a custom extravagant body, which has an even more spacious interior than modifications with the L index. The model can be equipped with all conceivable and inconceivable equipment at any level, up to glasses, which, at the request of the driver, change their light transmission.

At the end of 1998, a substantial modernization of the Sevens took place. The Sevens of the 1999 model year can be recognized by rounded “lower eyelids” and narrower direction indicators. The taillights also became slightly different. The design of alloy wheels has changed, the palette of body colors has expanded, a chrome strip has appeared on the trunk lid, lamps are now mounted in the door handles that flash after unlocking the locks with the remote control on the key and for twenty seconds illuminate not only the handles themselves, but also the asphalt under them. The standard equipment includes a hydraulic trunk lid. For a surcharge, you can get a RDC tire pressure monitoring system (abbreviation from German Reifen Druck Control), which constantly measures the pressure in each tire (including the spare tire) and immediately informs the driver if it deviates from the set parameters. Another electronic innovation is the DBC system, Dynamic Brake Control. In case of emergency braking, which the electronics recognize by the speed of the pedal, the system independently increases the pressure in the brake system to the maximum, which will help the indecisive or physically weak driver to save several meters of braking distance. Bavarian engineers did not put on their cars a first-generation system in which the actuator of the brake is located in a vacuum brake booster, and waited for the second generation.

A very high level of passive safety of the “sevens” is provided by 8 airbags: two frontal, two lateral “tubular” (built into the ceiling) to protect the head of the driver and passengers and four side (one for each door). At the highest level and comfort. For example, they offer three options for the front seats to choose from (regular type, contour type and “active” type – Active Seat massage chair with a hydraulic system, which, after pressing a button on the center console, will alternately pump and bleed liquid from two bags hidden inside the pillow seats), automatic climate control with the purification of polluted outdoor air and the possibility of layer-by-layer distribution of air temperature in the cabin, built-in cell phone with the ability to negotiate, A hand with a steering wheel, etc.

However, the most serious changes were hidden under the hood. The 6- and 8-cylinder engines were controlled by both Doppel-VANOS camshafts (previously only one), the 8-cylinder engines by the VANOS system for intake valves and the two-stage catalytic converters, which made it possible to satisfy the 2005 Euro 4 requirements (as well as on the 5th series ) In order to fit into these standards, a 12-cylinder flagship unit was installed with an electric heater.

Turbocharged 725tds with a vortex chamber engine, complemented by the latest diesel engines with an undivided combustion chamber, CommonRail injection system, turbocharging and intercooler: 3 liter R6. (184 hp – 730d) and V8 with a volume of 3.9 liters (245 hp – 740d) – one of the most powerful passenger diesel engines in the world, allowing a two-ton car to reach a maximum speed of 242 km / h, fuel consumption (relatively gasoline model 735i) reduced by 23%.

Exclusive L variants have a 140 mm longer wheelbase. The most prestigious is the representative model L7 (body length up to 5.4 m), developed mainly for foreign markets. Recently, the 750 XLA stretch has also been added to them, “stretched” by another 25 cm compared to the elongated 750iL.He endows the owner with a full sense of his own exclusiveness.

Models 740iL and 750iL can be ordered in lightly armored (class B4) performance Protection. Their body and glass can withstand bullets of small-bore small arms. These vehicles are equipped with safety tires as standard, on which you can drive up to 250 km at a speed of 80 km / h when deflated.There is also a version of the armored car (Security version) based on the long 740iL or 750iL. The main thing here is that they left the gates of the BMW factory and fully retain all the qualities inherent in Bavarian cars: excellent dynamics and controllability. In addition, the armored car is protected in class B6 or B7, as evidenced by the relevant certificates issued by the Federal Criminal Bureau (Federal Criminal Bureau) – such vehicles “hold” a shot even from 7.62 mm caliber weapons (Kalashnikov assault rifle and M16 rifle). In an extreme situation, they should not only protect the unbounded person about machine guns, explosives and incendiary mixtures, but, if necessary, be able to give a proper rebuff. To do this, you can order special holders with ball bearings for automatic weapons and cut out gun nests in the doors, and for this you have to completely redo the body. And so that the limousine does not turn into a trap, the engineers developed a system in which the squibs fire a windshield on command. As a result, a fully-prepared 750iL becomes available from 522,000 DM.Despite this, armored cars are quite popular, with 80% of all prepared cars going abroad.