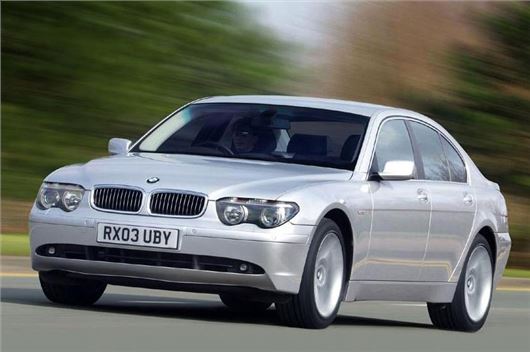 BMW made another big bet. This time on a new 7-series car. A beautiful car that did not lose its attractiveness after 7 years of being in the market was still a leader in its market segment in many countries. But the gambling Germans cannot rest on their laurels and again roll the “bones of luck”.

For the first time, the BMW 745i was brought to the attention of the public at the Frankfurt auto show in 2001, where it made a splash. True, the designers of almost all companies (starting from Mazda and ending with Mercedes-Benz) were simply shocked by the new design of the car. Many of them did not find words, but expressed themselves in purely pronouns. A new way in the design of BMW is to stop making identical cars, similar to each other like two Bavarian sausages, only of different sizes.

Critics are already discussing the unusual design of the BMW 745i with foam at the mouth. Not sure how to relate to the new look of the car? Just accept it as it is and get used to it, as it is definitely the design of the future. Many critics predict the BMW 745i a brilliant and long career in leading automotive markets. The novelty is distinguished not only by the grace of appearance, but also by its extraordinary power and perfect management. The only negative thing about the table is that the price of the car will be as high as its quality. However, the subtle connoisseurs of luxury sedans are unlikely to stop or upset.

But, let’s look at everything in order. To begin with, let’s turn to the 4.4-liter V8 gasoline engine, which has a capacity of 333 horsepower, which is 47 more horses than its predecessors, which despite the extraordinary power is 10% more economical. The huge herd under the hood, and even not so voracious – is tempting, is not it? All this was made possible thanks to a system that manufacturers call Valvetronic. The secret to this system is the camshaft, which opens and closes the valves with such accuracy and speed that the traditional throttle system cannot afford. The gas pedal precisely controls the flow of the combustible mixture. Manufacturers claim that the new car is able to accelerate from a standstill to a speed of 90 km per hour in 6.2 seconds.

Now let’s talk about the gearbox. The BMW 745i is equipped with a 6-speed automatic transmission, which contributes to fuel economy. But, this is not a simple machine, but Steptronic, which makes gear shifting very convenient. Moreover, the lever box in the usual place you will not find. Now it is located behind the wheel, as in classic American cars.

The BMW 745i rests on 19-inch wheels shod with Michelin Pilot Primacy tires (you can choose the Pirelli P Zero) and is equipped with the most advanced car stabilization system. The wheelbase of the new model is not only longer, but also more perfect than its predecessors. Thanks to all this, the BMW 745i behaves on winding roads just like the sporty Z8. Engineers managed to reduce the car’s rolls in corners by 80%, so that no matter what sharp turns the driver of the new “seven” enters, passengers will not feel “nauseating” shaking. This was achieved thanks to the Active Body Control system, which is also used on Mercedes-Benz S-Class sedans.

The car interior is equipped with the iDrive telematics system, which consists of a processor that monitors the operation of 720 functional systems (including climate control and a stereo system), an LCD monitor, and a spinning button located in the center of the console and acting as a computer mouse. iDrive is much more functional than standard navigation and cruise control systems. With this “mouse” you can program the operation of the climate control system at your discretion. The only drawback of iDrive is that if you are not a programmer, it will be difficult for you to figure out how to use it. For example, if you want to tune in to the cleanliness of a radio station, then instead of the usual button control, you will need to enter a complex program. It remains to read the thick iDrive instruction manual. “Car for the driver” – that’s what all the company’s models were called – it became much more complicated and smarter. Perhaps even smarter than you.

The car is equipped with an electronic parking brake, which can be used as normal in the event of a breakdown of the standard brake system. At the same time, the system of automatically keeping the car stationary is impressive until you press the gas pedal, which will not be out of place when stopping on the hills for a red traffic light.

Well, and finally, let’s talk about the interior of the BMW 745i. The lining is made of high quality soft leather. Both the front and rear seats are very comfortable and spacious. The realm of luxury from BMW has not become cloying. In everything from the upholstery of the seats to the cup holders you can feel the style, the corporate identity of BMW. When you get into this car, you will never confuse its interior with Mercedes-Benz or Jaguar.