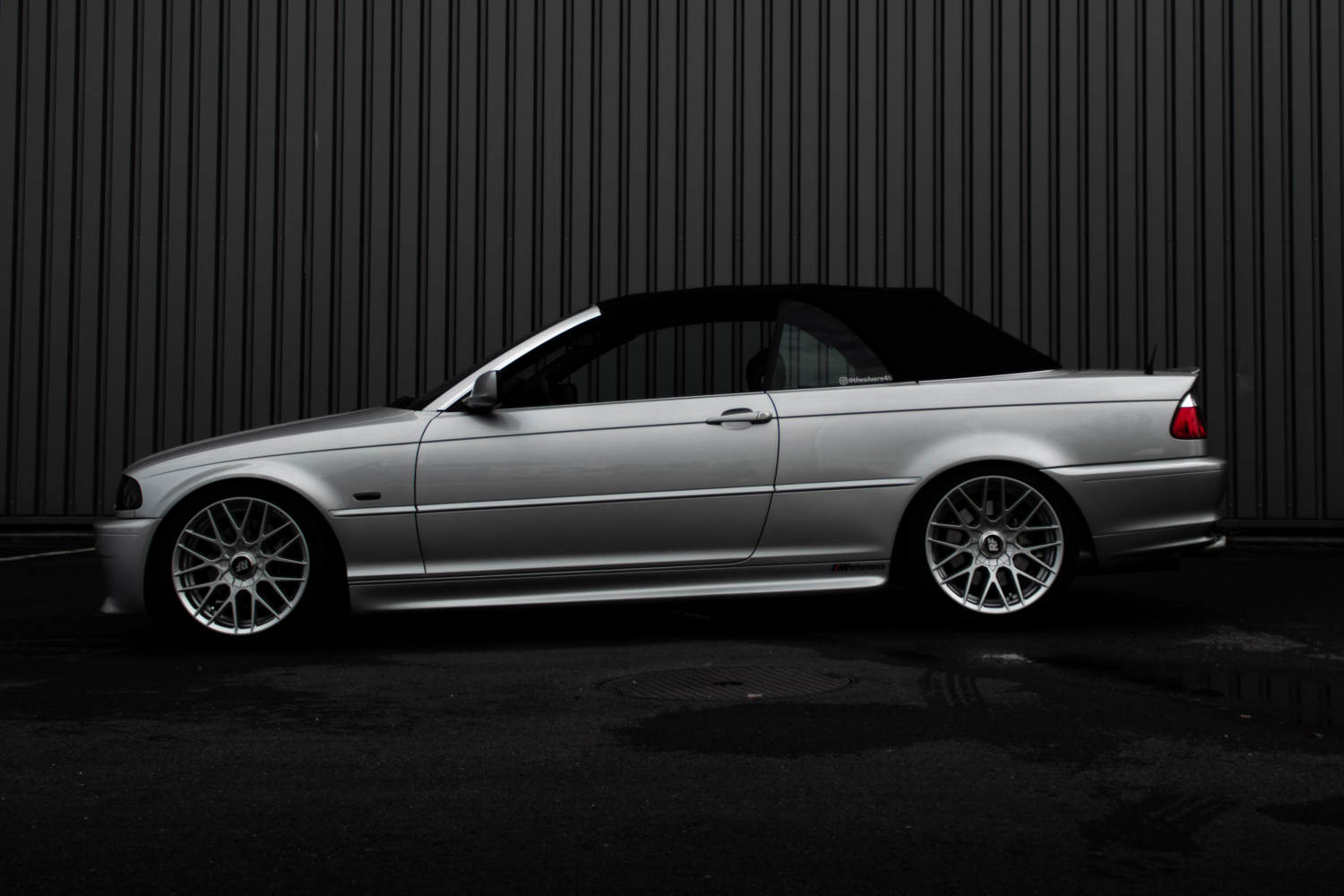 In March 1998, a long-awaited event occurred, the unveiling of the new 3 Series generation, the E46. During the development of the car, a quite reasonable compromise was reached between the desire to increase the capacity of the body and interior comfort while maintaining the dimensions that are typical for this class of cars (according to the European D classification group).

The wheelbase and dimensions are slightly increased, the track of the front and rear wheels is significantly increased – by 63 and 57 mm, respectively. The model’s own weight has increased (by about 50 kg) compared to its predecessors, despite the fact that the use of aluminum alloys in the front and rear suspension arms has reduced their unsprung mass by 8 kg. Luxury trim options and equipment at the level of more solid 5 Series models, which caused the complaints of many customers, is slightly increased. In general, the designers managed to maintain the previous operational qualities of the models of this series, which distinguished them from their analogues, as well as create a new, more modern look of the compact car.

The first models to appear were sedans, which began to be produced in parallel with four models of the previous E36 series with bodies: a 3-door compact hatchback, a 5-door touring station wagon, a 2-door coupe and a convertible.

The E46 sedan family received two new engines. Until the new generation of 4-cylinder 16-valve engines, the first base model was the 318i with a 1.9-liter, 8-valve four cylinder with 118 hp. For the first time on BMW 4-cylinder engines, two additional balancing shafts appeared to improve their smooth operation. On models 320i, 323i and 328i, the previous in-line light-alloy straight-sixes are installed, equipped with a new gas distribution mechanism with a Doppel-Vanos system that regulates gas distribution phases in a wider range. This made it possible to increase power at low and medium frequencies of rotation of the crankshaft and to shift the maximum torque from the previous 3950-4200 to 3500 rpm.

A fundamentally new function was a 4-cylinder 16-valve direct fuel injection diesel engine (with undivided combustion chambers), equipped with a high-pressure fuel supply system and turbocharging with intermediate air cooling. The new engine provided the 320d with high dynamic performance that exceeded the base model 318i and better (by about 25%) fuel economy. The relatively soft and quiet operation of this rather powerful engine with a liter capacity of about 70 hp/l is noted – the first-born of a new generation of highly efficient BMW diesel engines.

Among the technical innovations were a 5-speed automatic transmission with adaptive and manual control modes, the ABS braking functions have expanded, which not only prevents the wheels from locking, but also allows the car to navigate more easily into a braking turn (SHS), with traction control (ASC + T) also performing the functions of a limited slip differential. For the first time on cars of this series (although, as custom equipment on machines with 6-cylinder engines), the third generation of the so-called dynamic stabilization system DSC, which appeared several years ago on the series 7 and 8 models, is used. It helps the driver to drive the car constantly taking into account and evaluating instant information on the frequency of rotation of each wheel, steering angle, steering lateral acceleration and the center of mass of the car when changing its trajectory. Depending on the situation on the road, the DSC can release power and brake each wheel individually, thereby correcting the mistakes that the driver may make if, from the point of view of the DSC’s electronic brains, cornering or changing the trajectory is incorrect.

In 1999, the engine range was expanded by a 1.9 liter engine with 105 hp, which is a derated version of the 1.9 liter 118-horsepower engine. However, this modest engine is able to accelerate the car to 200 km/h, and to reach 100 km/h it takes 12.4 sEcon’s. In addition, at the end of the year, the 330d appeared with a new 184 hp turbo-charged diesel engine equipped, like the 2-liter turbodiesel, with a Common Rail system (common injection line).

In the same year, the two-door coupe was completely updated. As before, with external similarity, they do not have a single external part with a sedan; they are 17 mm longer, 18 mm wider and 46 mm lower. They are equipped only with gasoline engines with a working volume of 1.9-2.8 liters. The standard equipment of the coupe includes 16-inch wheels and a sports suspension with short and stiff springs, providing sharper handling characteristics.

In the fall, six models of spacious Touring station wagons of the new generation E46 went on sale. The engines are the same as on the sedan with the exception of the 1.9 liter (105 hp) four cylinder engine, which is not offered for the coupe. At the same time, production of the M3 with the E36 body was discontinued, so only the convertibles and Compact models were included in the old series in 2000.

In 2000, sedans and station wagons generally did not change much. The main news was the appearance of two 2.2- and 3.0-liter gasoline engines and three basic trim levels for sedans, which immediately divided buyers into supporters of sports style and comfort. For the former, the M sport is offered with sports seats and a steering wheel, stiffer suspension and 17-inch wheels. There are purely external differences. Options Comfort and Comfort Plus are designed for a softer ride and differ in both decoration and interior equipment. The name Comfort Plus speaks of a high level of standard equipment. It includes expensive xenon headlights, electrically heated front seats, the inclusion of wipers using a rain sensor, etc.

The world premiere of a convertible on the 3 Series chassis took place in March 2000 at the Geneva Motor Show, and the cars went on sale this spring. The outward resemblance of the convertible to the coupe is obvious, although the cars have different doors and rear wings. The cabriolet has safety arcs automatically triggered during rollover and a folding soft top that fits into a special volume container and can be dismantled. In the cold season, a hard top is installed that turns the car into a full-fledged coupe.

In June 2000, the lineup of sedans and station wagons was supplemented with all-wheel-drive 330Xi and 330Xdi complete sets with a new drivetrain. New cars received a modified front suspension and all-wheel drive through a transfer case with a Morse chain and an interaxle differential. In general, the transmission is similar to that used on X5 off-road vehicles. Instead of mechanical limited slip differentials, the ADB-X “automatic differentiation” system is used, which allows you to redistribute the traction forces on the wheels depending on their adhesion to the road surface by means of a working brake system. In addition, the vehicles use the latest in-line 6-cylinder engine with a working volume of 3.0 liters, created on the basis of a 2.8-liter unit. Piston stroke increased from 84 to 89.6 mm. Power increased by almost 20% – from 193 to 231 hp, which allowed heavier cars to have better dynamic performance compared to conventional models 328i and 328i Touring. Two other models (330Xdi and 330Xdi Touring) are equipped with the famous 2.9-liter turbocharged diesel engine with 184 hp. At the end of 2000, the entire family of “triples” found new options – 320i and 325i. For the first, the engine capacity increased from 2.0 to 2.2 liters, and power – from 150 to 170 hp. The working volume of the 2.53 liter model 323i unit remained the same, but as a result of the modernization, the capacity increased from 170 to 192 hp, and the machine index was changed to 325i.

The coupe family is now led by the recognized leader among the cars of this class, the M3. External differences of the car are in a different front bumper-spoiler with an enlarged air intake, stylish ventilation grilles on the sides of the front wings and special chromed alloy wheels. Inside, there are sports seats, a “three-spoke” steering wheel with an abundance of various function buttons and the now fashionable chrome bezels of round dials on the instrument panel. The working volume of the M3 engine is increased by 45 cubic cm, which allowed BMW to bring the power of this outstanding engine to 343 hp at 7900 rpm.

In November, the new Compact was declassified. The hatchback created on the shortened platform is distinguished by a new head optics with four separate different-sized round headlights (further development of the “eyelet” theme) and triangular taillights in which the separate reflectors are covered by common glass. The hatchback turned out to be 280 mm shorter than the sedan, but the wheelbase remained the same (due to the shorter rear overhang). Consequently, there is no talk of worsening conditions for the driver and passengers. In addition, everything a sedan is rich in will be available to the hatchback. In particular, the universal capabilities of the “compact” have been preserved: the separate backrest of the rear seat can be folded and the volume for transportation of luggage increased. The rear seat is cramped, but to facilitate landing, the front seats not only recline, but also move forward and up.

With the advent of Сompact, the Bavarian concern is completing the update of the lineup of the 3 Series E46.

In March, the first batch of BMW 3 Series sedans was launched at the Avtotor assembly plant. In Kaliningrad, only two modifications are assembled “treshki” – 318i (1.9 l – 118 hp, manual transmission or “automatic”) and 320i (2.2 l – 170 hp, only automatic transmission). Station wagons, coupes and four-wheel drive versions will be delivered from Germany. Although, as orders arrive, assembly of other modifications may begin.

At the 2001 Geneva Motor Show, there were two premieres at BMW’s booth. One is the official premiere of Compact. In addition, it became known for sure that the 325ti and 316ti modifications will be the first to enter the market (summer 2001). The vehicle’s wheel suspension will be sporty. Under the hood of the “three hundred and twenty-fifth” – in-line “six” with a capacity of 192 hp The maximum speed is 230 km / h.

And the second premiere was hidden under the hood of the BMW 316 compact. This is a new 1.6 liter Valvetronic family gasoline engine. The motor does not have the usual throttle – it replaces … an advanced intake valve drive! A complex system of levers and gears, driven by an electric motor and electronically controlled, constantly changes the duration and depth of opening of the intake valves so that it allows the most accurate metering of the volume of air sucked into the cylinders (the electric motor, turning the eccentric shaft, changes the shoulder of the intermediate lever; the more lever arm, the higher the intake valve lift). Bavarian engine builders spent 10 years developing this system! In the near future, Valvetronic technology will be implemented on all BMW engines, including V8 and V12 engines. And the first-born of the Valvetronic family was a 1.6-liter in-line sixteen-valve “four” that develops 115 hp and at the same time it consumes 10% less fuel than a “regular” engine of the same volume.